BEST OF EGYPT AND NILE CRUISE

See the best of ancient Egypt for 10 days 09 nights

Join us to celebrate the land of ancient wonders and modern miracles on our Best of Egypt and Nile Cruise. You’ll enjoy 10 wonderful days, 4-nights in high-quality Cairo hotels, 4-nights aboard a deluxe Nile cruise, many meals, transfers, and plenty of included touring.

Arrive in Cairo, where East and West come together in a wonderful mix of old and new. After breakfast you'll be met by our representatives enjoy a guided walk along El Moez Street, one of the oldest and most amazing streets in Cairo, dating back to the Fatimid period. Begin at Azhar mosque, one of the best medieval architectural treasures in the Islamic world. Continue to Bab Zuweila, a medieval gate in Cairo considered one of the major landmarks of the city, and Al Hussein Mosque, named for the grandson of the Prophet Muhammed, it is one of the holiest Islamic sites in Cairo.
Walk by Al Hakim Mosque, Bab al-Fetouh, and Bab al-Nasr, a massive fortified gate with rectangular stone towers flanking the semicircular arch of the eastern Portal. Proceed to Mosque-Madrassa of Sultan Hassan, remarkable for its size and innovative architectural components, Al-Rifa'I Mosque, then to the Mosque of Ibn Tulun, the oldest mosque in the city surviving in its original form.

Breakfast at you hotel,this morning enjoys a half day tour to the Egyptian Museum, where you'll see, among other treasures, the priceless antiquities of Tutankhamen's tomb. The remainder of the day is at leisure to explore the city on your own, or take advantage of our optional excursions.

Have an in depth view of the well-preserved Royal mummies at the Egyptian Museum.

Enjoy an optional guided tour of Cairo's Old City, including the Citadel of Saladin, built on the remains of a Crusader-style fortress and the Alabaster Mosque. Continue to the famous Khan El Khalili Bazaars, where the sights, sounds, spices and exotic clothing and jewelry, hand-hammered copper, ceramic ware and other treasures await your deft bargaining to win them at astounding prices.

This morning, after breakfast, your guide will escort you on a fascinating tour of the most famous of all sites in Egypt—the Pyramids of Cheops and Chephren. These monuments have stood for 46 centuries and are considered one of the Seven Wonders of the World, possibly the most visited monuments of Egypt. The Sphinx, a feline character with the body of a lion and the face of Khufu (Cheops in Greek) is 50 meters long and 22 meters high. Carved from a single stone, it lies just before the Pyramids, and even today its meaning and origin remain shrouded in mystery.

Take advantage of a unique opportunity to explore the interior of the pyramids. This 30-minute visit of the interior is unguided and will take place during free time.

You must be in good physical condition to fully enjoy this tour, which involves traversing narrow passages and steep stairways. Some areas have very low ceilings preventing visitors from standing upright. This excursion is not recommended to anyone suffering from heart conditions, back problems, asthma, or claustrophobia.

After breakfast will transfer you to the airport early this morning for the flight to Luxor, capital of the New Kingdom when Pharoah Ahmos, in 1580 BC, drove foreign invaders (the Hyksos) from Lower Egypt. It was then that Luxor became a grand city of luxurious palaces, huge temples, large gardens, as well as an important diplomatic and trade center of the ancient world. Transfer from the airport to the pier for embarkation aboard your deluxe Nile cruise ship. Settle into your cabin and enjoy lunch aboard.

This afternoon, visit the East Bank of the Nile. Highlights of today's tour include visits to the Temple of Karnak, one of the most significant monuments of the Pharaonic legacy, with work carried out on the temples over a period of 1500 years, and Luxor Temple, strikingly graceful and added to over the centuries by Tutankhamen, Ramses II, Alexander the Great, and others.

After breakfast, disembark and board your touring coach to visit the West Bank of the Nile and the Valley of the Kings, where 64 of Egypt's Pharaohs have their royal tombs hewn into the sheer rock. Continue to the impressive Deir El Bahari mortuary Temple of Queen Hatshepsut, an architectural wonder built against the backdrop of a looming cliff face and the Colossi of Memnon, two huge seated statues of Amenhotep III. Afterwards, discover the ancient tomb of King Tutankhamun. Explore the rooms covered in mural paintings, and to the burial chamber, which still contains the pharaoh's mummy in its original sarcophagus.

Wake up early to embark on a Hot Air Balloon ride for an incredible bird's eye view over the Nile. *Subject to weather conditions.

Your cruise ship sails from Esna to Edfu. As you go south, you will have an opportunity to view rural life in Egypt. The crops, methods of farming, animals and irrigation systems have changed little from 4,000 years ago. Here you best appreciate the fascinating contrast of ancient and modern ways of life, which coexist in Egypt and make it one of the world's most interesting of travel destinations.

At Edfu, you'll see the Temple of Horus, Egypt's best-preserved temple. Afterward, board your ship and sail to Kom Ombo, where, in ancient times, sacred crocodiles basked in the sun on the river bank. The Temple of Kom Ombo is unique in all of Egypt and is shared by the two gods Sobek and Haroeris. These Ptolemaic temples overlook the Nile and feature fascinating drawings on the walls, including detailed drawings of surgical instruments.

Sail to Aswan, the gateway to Africa for the ancient Egyptians. Originally called "Sain" from "sanite", the name of the red granite extracted from its quarries, Aswan became a hub of trade in spices, leather, ivory, fruit, grains, baskets and mummified and living crocodiles.

After lunch aboard your cruise ship, visit Philae Temple which for centuries was the holiest site for Isis worshippers. The temple was officially closed down in the 6th century A.D. by the Byzantine emperor Justinian and was the last pagan temple to exist in the Mediterranean world. After the construction of the Aswan Dam, the half-submerged temple complex was completely dismantled and rebuilt to the original specifications on the nearby island of Agilika, which was reshaped and landscaped to resemble the original Philae. Metal pylons on the old island of Philae can still be seen rising from the water to the south of Agilika.

Before returning to your cruise ship, enjoy a tour by felucca (a small, swift Egyptian sailboat) ending at The Terrace in the Historic Old Cataract to enjoy high tea and sunset from this magnificent spot. The Terrace is a legendary venue, where Dame Agatha Christie once settled for hours, intently penning chapters of her celebrated Death on the Nile. Look out over the Nile, Khnum Temple, and Elephantine Island while savoring an authentic high tea experience enriched with mouthwatering international pastries.

Later this evening, enjoy a festive farewell dinner with the group.

Early this morning takes advantage of an optional excursion to the temple complex of Abu Simbel.

Otherwise, remain on board and enjoy the facilities of the ship. This afternoon, disembark and enjoy lunch at a local restaurant. Visit Aswan's High Dam, which controls the Nile and is a major source of hydroelectric power in Egypt. Also visit the granite quarries where a partially carved and cracked obelisk will clearly demonstrate how the giant forms were hewn from the solid rock.

Later today, transfer to the airport to board your short flight back to Cairo.

Early this morning, fly from Aswan to nearby Abu Simbel, the site of the Great Temple of Ramses II, one of the most magnificent of all temples in Egypt and a UNESCO World Heritage Site. Part of the Nubian Monuments, the twin temples of Abu Simbel were originally carved out of the mountainside during the reign of Ramses II in the 13th century B.C. as a lasting tribute to himself and his queen, Nefertiti. After the creation of Lake Nasser, formed by the building of Aswan High Dam in 1968, the Abu Simbel complex was relocated in its entirety high above the reservoir. After exploring the temple complex, return to Aswan.

On occasion, Egypt Air cannot provide a flight on the scheduled day of the excursion. In this case, you may instead visit Abu Simbel by land in a private air-conditioned vehicle, a journey of approximately 4 hours each way, with a box lunch provided. The land version is $199 if paid locally and requires a minimum of 2 passengers. If you pre-booked the excursion for $298, you will receive a refund of $100 if you choose the land version, or a full refund if you decline.

After breakfast, bid farewell to Egypt as you're escorted to the airport for your return flight

There are no reviews yet. 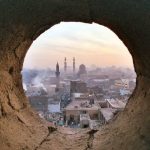 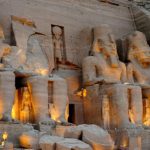 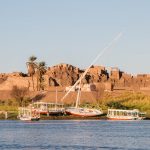 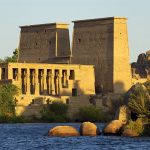 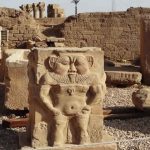 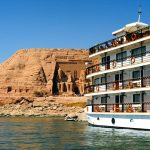 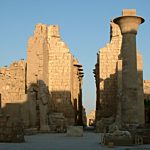